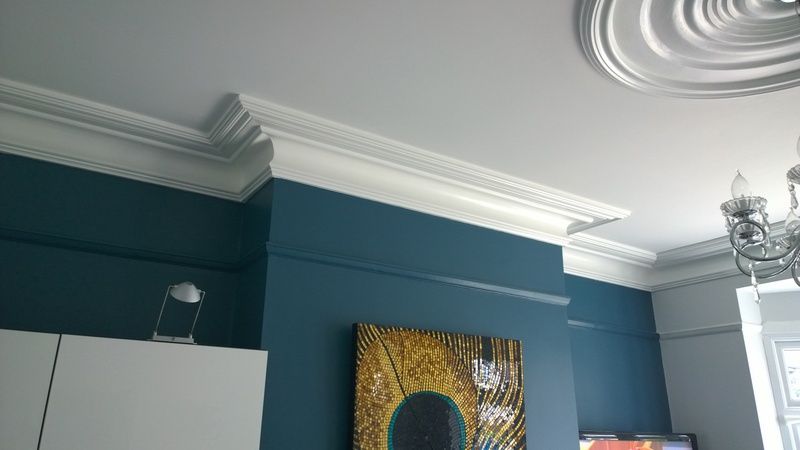 The Different Types of Ceiling Coving

Ceiling Coving is mainly used in interior painting and decorating and comes in many different styles but there are also different types of coving material: Plaster, polystyrene and duropolymer coving.

The most traditional is plaster coving, and the first part of this project deals with putting up plaster coving and is also suitable for installing coving made of polyurethane – also called duropolymer coving.

The same method can be used to fit polystyrene coving, which is the cheapest coving, although not as durable or as versatile.

The most common sizes of coving are 125 mm and 85 mm. The sizing can be confusing because the size of ceiling coving is stated as the imaginary line across the coving, rather than the physical height or projection – think of it as the hypotenuse of a triangle, with the wall and ceiling forming the other two sides.

Some of the patterned ceiling coving is very detailed. The Victorians were masters when it came to ceiling coving and today we still try to mimic the endless styles that they designed. The intricate shapes and carvings apply intrigue and an artistic feel to them so that they look like they’ve been carved from stone instead.

The Difference Between Coving and Cornice

There is some confusion about the difference between cornice and coving. They are both decorative mouldings but the words are not different ways of saying the same thing. Ceiling Coving is designed to fit into the corners of a room, usually in the corner between the top of the wall and the edge of the ceiling.

Ceiling Coving usually has a uniform profile, with similar moulding on the top and bottom lengths, meaning that it is symmetrical when viewed from the side. (Therefore if it projects across the ceiling by 10 cm then it would drop down the wall by 10 cm too.) Ceiling Coving is also usually fairly simple in design, although not always.

Cornice is a decorative architectural moulding used to add visual interest to a room, or a feature in a room. Cornicing can be added to cupboards, or used instead of, or in addition to, coving to make a decorative room border. There are even cornices which are designed to hold up-lighters so that you can wash light across a wall and ceiling, giving a softened indirect light, which is great for mood lighting.

We use cookies to ensure that we give you the best experience on our website. If you continue to use this site we will assume that you are happy with it.OkPrivacy policy